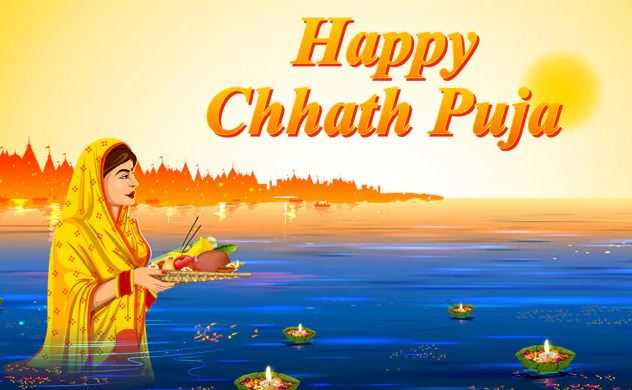 Chhath is a festival of worshiping the setting Sun on the first day followed by the worshiping of the rising Sun on the second day, celebrated in Bihar, Jharkhand, parts of UP and Nepal and also in various parts of India and the world (where the population of Bihari lives)

It is a four-day affair celebrated from the fourth day of KRISHNA PAKSH (Last 15 days of the Hindi calendar month) KARTIK MONTH (OCT/NOV) and the Arghya is offered on 6th (Evening, Setting Sun) and 7th (Morning, Rising Sun) day of the month. It is considered as the “MAHAPARVA”.

In Bihar, it is celebrated with utmost devotion and dedication. Starting with Nahaya Khaya (the day when the devotees take meal after bath with some rituals) followed by Khadna ( the devotees take only one brief meal of rice, milk, and fruits in the evening after the day-long fast and without salt) and the Evening-Arghya (offering water&milk) to the setting Sun on the third day and then the Morning-Arghya to the rising sun on the fourth day, finally ending the festival.

The most significant part of this four-day worship and festivities is the evening Arghya and the morning Arghya loaded with utmost devotion, dedication, and cleanliness. The whole affair of offering arghya is conducted at the bank of rivers. The whole community of Hindu carries out the mass cleaning programme of surroundings, streets, and riverbanks thereby reiterating the message of the importance of cleanliness and the importance of NATURE (River, Surroundings, Cleanliness)

However, the festival is mostly celebrated by the Biharies (Undivided Bihar) all over India and the world. ‘Bihari’ is a derogatory remark in general hinting towards being ‘illiterate’ or ‘poor’ or ‘uncivilized’ or such other terms. But the celebrating festival like Chhath stamps the level of their high moral, ethical, religious, psychic and behavioral integrity.

The most important ritual is to offer Arghya first to the setting sun followed by the arghya to the rising sun the next day. Worshiping the rising sun ( symbolically anything, anyone successful or powerful) is the trend of life all over the world but to worship or respecting the setting sun (symbolically anything or anyone in decline) could be the affair of those who are practising very high moral and psychic integrity in life whereby they see the death (the setting sun) and the birth (the rising sun) with objectivity and equal respect. This is what has been taught is ‘Geeta’ too to take death and birth in life with equal respect.

Mythologically ‘Chhath’ has many interpretations.

It is believed that when the Pandav as in Mahabharat had lost everything in the gambling, Draupadi, the Queen of Pandavas had worshiped the god ‘Sun’ to get blessed and regain peace and prosperity.

Another story says that it was initiated by Karna, the unsung hero of Mahabharat who was a great devotee of the God Sun and who had been blessed by the God Sun to be one of the noblest and greatest warriors.

Yet another mythological story tells the queen of Rama, the Lord of Ayodhya and the reincarnation of Lord Vishnu had started this festival by performing 6 days worship of the God Sun by offering Arghya at the bank of Ganga at Munger, Bihar for the peace, prosperity, and welfare of her subject, the common men.

Besides these mythological interpretations and significances, there are a lot many scientific and symbolic significances as well.

Showing respect and worshiping NATURE (the sun, the earth, the rivers, the surrounding) is the most important rituals of this festival which reminds us how important are these elements to mature for the very existence and survival of life on earth. It teaches the very basic philosophy of life that without having a cordial and respectful harmony among these elements we cannot survive. In the modern world and scenario, we are facing global problems of imbalance of life and nature and the world is busy campaigning with fear for creating awareness about respecting nature.

Symbolically too the festival has lots of significances.

By worshiping the setting sun a message is given that respectful end (death) of any existence is as important as the often celebrated beginning (birth)of anything and we should value this philosophy of showing our equal respect to the coming and the departing or the beginning and the end or the birth and the death. Remaining indifferent in birth or death, in victory or defeat, in happiness or sadness and continue performing our duties is the essence of life and living.

Logically too it’s a proven philosophy and fact that if we want peace, the real and eternal peace in our life then we have to respect the death with calmness of mind as we celebrate the birth with festivities because the life is nothing but the period loaded with your deeds (right or wrong depending upon your moral and ethical fabric) between this festive birth and respectful death. Also, it can be seen as established doctrine that after a festive birth, a respectful death is possible only if we spend the period in between with righteousness and objectivity like the Sun, the source of energy and light for life, spreading the light and bestowing every one with energy without any discrimination. It tells us to rise (to get birth and grow) like the sun in the morning and live with piousness to get a respectful end (the death).

The social cooperation, respect and equanimity for each other regardless of any cast or creed barrier is exemplary. One can think nothing but to wish this to last forever and ever.

So ‘Chhath’ is not only a festival but many more than that. Let’s be proud to be Bihari to have these moral guts and strength to respect the end, the death with the same peace and calm of mind and Psyche as we welcome the beginning or the Birth.

HAPPY CHHATH PUJA TO ALL.

This is the personal thought of the Author…

Samachar One News is a Hindi web portal. Here you get all the latest news about the country and the world. Apart from this, you can read detailed reports on entertainment, sports, etc.
Contact us: [email protected]

© Samachar One All rights Reserved | Designed by Patliputra Digital Media